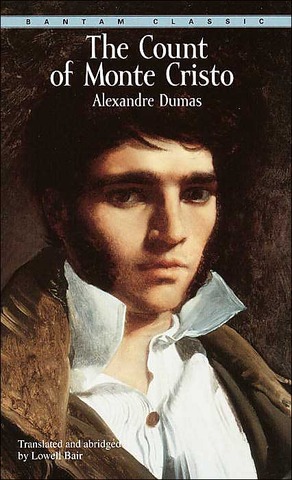 Title: The Count of Monte Cristo

Summary: Set against the turbulent years of the Napoleonic era, Alexandre Dumas’s thrilling adventure story is one of the most widely read romantic novels of all time. In it the dashing young hero, Edmond Dantès, is betrayed by his enemies and thrown into a secret dungeon in the Château d’If–doomed to spend his life in a dank prison cell. The story of his long, intolerable years in captivity, his miraculous escape, and his carefully wrought revenge creates a dramatic tale of mystery and intrigue and paints a vision of France–a dazzling, dueling, exuberant France–that has become immortal.

L– Have I told you guys yet that I LOVE The Count of Monte Cristo? Because I do.

D – This was my first time reading the book…I would like to take a moment to praise Alexandre Dumas and ask myself: WHY HAVEN’T I READ THIS BOOK SOONER?!?

L – It’s so good I’ve read it over ten times. This book has everything I’m looking for: a compelling story, a smart main character, and lots and lots of revenge.

D – Right?! I was on the edge of my seat for most of the book. It is absolutely brilliant! We start our story off with Edmond Dantès returning to Marseilles (his hometown) with some cargo for Monsieur Morrel on the ship Pharaon. Unfortunately, the previous Captain had died during the voyage. His dying wish was to have Edmond retrieve a letter and deliver it, to which Edmond was going to gladly do as soon as he could.

L – He is, of course, very happy because he is all ready to marry Mercédès, the beautiful love of his life. Unfortunately for him he has unknowingly made some enemies. Danglars, who wants the position of Captain that Edmond just received and Fernand, a “friend” of his who also wants to marry Mercédès.

D – Keep in mind that during this time, France is going through some crazy political turmoil. There are people who support Napoleon as their true Emperor and those who support Louis XVIII as their true King. If you happen to support the one who is not in power at the time (it changes relatively frequently), you’re killed off and/or sent away. So Danglars and Fernand devise a plan to have Edmond accused of fraternizing with Napoleon supporters by turning in the letter that the previous Captain was going to have him deliver. Edmond, of course, was oblivious to what was written in the letter. He could not read very well and was simply fulfilling the wishes of the beloved Captain.

L – He was arrested and taken to a deputy by the name of Villefort. Now Villefort’s greatest weakness is ambition and he is terrified of anything that would get in the way of him obtaining a position of power. Edmond explains what happened with the captain and that he does not know what the letter contains. Villefort believes him and probably would have let him go, except the intended recipient of this traitorous letter is Villefort’s father. If anyone were to discover this he would be ruined. So instead he secretly sends poor Edmond to the Château d’If, an island prison.

D – Edmond is very distraught by all of this (for very good reason). He ends up getting sent down to the lower levels of the dungeon because he begins to threaten the jail keeper for answers and to speak to the man in charge. After 7 agonizing years, Edmond decides that he was done living. So he slowly starves himself until he hears a scraping behind his cell wall….

L – Driven by curiosity Dantès begins to chip at the wall towards the source of the scraping sound. And eventually he discovers that there is another prisoner who is also digging. They break through and Dantès meets the Abbè Faria, who has been trying to dig a tunnel to escape. He’s just been digging in the wrong direction.

D – After finally having a companion, Edmond and Faria become close friends and they share one another’s history. This is the moment that Edmond realizes that he has been betrayed and vows for vengeance! Faria, a very intelligent man, devises another plan to escape and the pair set to work…mind you this takes another 7 years. And during that time Faria teaches Edmond how to read and write in several languages, mathematics, the sciences, and various other things.

L – Sadly, right before they reach their goal Faria has an attack and is very near death. Before he dies he tells Edmond about a great treasure that he alone had the location to. Edmond manages to escape (after a total of 14 years imprisonment) and finds the treasure. He then becomes The Count of Monte Cristo, and that’s where the real fun begins.

L – Now we don’t want to spoil too much for you so that’s where we’ll leave the summary but you should give this book a read. (The movie is full of lies.)

D – I don’t think a movie could ever really capture the genius that is this book.

L – It’s not a bad movie, it’s just not accurate. So if you’re interested give it a try but read the book first.

D – Dumas does a very good job at setting the stage for this book. He meticulously sets up several different plots after Edmond escapes prison, which you believe have nothing in common whatsoever until you get to the end and then *BOOM* everything is connected to each other and is wrapped up for you in a neat little bow.

L – Something to keep in mind is that Dumas was paid by the line. Which means his writing tends to be very dialogue heavy. This isn’t a bad thing and it helps the story move along but sometimes it’s a lot.

D – Yes. It was difficult at times to keep track of what was going on…but once I got to the end, it all made sense.

L– This is the weakness in the book. The different plot lines can be a bit complicated to keep track of, but push through and everything will make sense.

D – It also doesn’t help that this book was written in the 1800s, so it can be a bit difficult to understand the social and political dynamics going on.

L – The biggest strength of the book is how devious The Count is. As his plan progresses more and more you just have to step back and go “wow.”

D – YAASSS!!!! I really would have to set the book down to revel in just how amazing The Count’s plan was. And then I’d get all excited and try to guess how things would go…yea I ain’t as smart as he is…

D – I’d recommend an abridged version to those who might be hesitant to try. But please, please, PLEAasseee read it!!! It’ll be worth it!!!