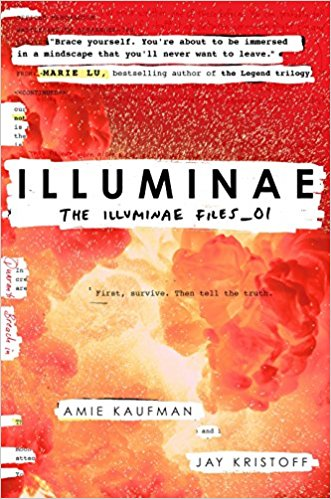 Summary: The year is 2575, and two rival mega-corporations are at war over a planet that’s little more than an ice-covered speck. Now, with the enemy fire raining down on them, exes Kady and Ezra – who are barely even talking to each other – are forced to escape on the evacuating fleet. But their problems are just beginning. The fleet’s AI has gone crazy, a deadly plague has broken out on one of the ships, and nobody in charge will say what’s really going on. As Kady hacks into a tangled web of data to find the truth, it’s clear only one person can help her: the ex-boyfriend she swore she’d never speak to again.

L – We start out the story with Kady and Ezra explaining what happened when their home planet was attacked.

D – They had just broken up when all of a sudden these ships come and start bombing their community…which was not supposed to be there…for reasons…so yea, people are dying left and right. Kady and Ezra get out of there by the skin of their teeth. It’s not pretty.

D – All of the ships have taken a lot of damage, so there is no way for them to make a speedy getaway. The only thing they can do is travel to the nearest warp gate which is several months away at the rate they’re going. And the damage received also means that a lot of crew members were lost. So the civilians are being tested to replace the crew members. Ezra is put into training to become a space fighter pilot, while Kady ain’t having any of that and basically tells everyone to screw themselves.

L – Now this is a tricky book to talk about without getting too much into spoilers. And since this book relies on suspense we’ll do our best to not ruin that. The damage to the battleship Alexander has compromised the ship’s AI system, AIDEN. This leads to some trouble and they have to shut AIDEN down. Unfortunately this means that they cannot travel fast enough to get away from the Lincoln. So they have to turn it back on and AIDEN decides that he won’t let them turn him off again.

D – Dun dun DUUUNNNN!! I mean ya gotta have an evil AI in any futuristic book. He ends up blowing up the Copernicus…meanwhile the people on board the Alexander are trying to cover up the fact that they got a crazy AI and Kady (being the awesome hacker that she is) smells something fishy about the whole situation and proceeds to do some digging. And really a lot of the book is reading what Kady finds.

L– This is when things start to go really crazy. Again, avoiding too many spoilers but Kady and Ezra have to get over their bad feelings from the breakup and work together to save everyone onboard the ships from a deadly plague.

D – You will definitely not find another book written like this one. It is literally like someone handed over a pile of files for you to leaf through and gather information from.

L – It’s a bit similar to books that are in journal format but we have the added suspense of this information coming from non-personal sources. We don’t have that guarantee of “this is so and so’s journal so we know that they survive”. The different perspectives make it very fun to read.

D – yessss. The suspense is killer in this book. It was a roller coaster for me. But I appreciated that the authors changed perspectives so often throughout the book. It kept me engaged and I wanted to know what the heck is going on.

L -The technological and world building aspects of this book were also very good. You easily understand what can and cannot be done in this world and you have a pretty good understanding of how the society works.

L – While the different perspectives are interesting and entertaining sometimes they are a bit weak. In particular some of the letters between characters could be a bit dry. The suspense was more than enough to carry the story despite this but I feel like these parts could have been left out of the story the majority of the time.

D – I also thought the story could get pretty graphic…

D – It probably wouldn’t have been so bad if there wasn’t so much suspense…but yea…if you don’t like gory stuff, this probably isn’t the book for you. Just telling you now.

D – I loved the writing style. It was unique and fun to read, even with those dry bits. I think they were necessary to give the appropriate ‘feel’ the authors were going for.

L – I do agree with that. What I’m saying is that occasionally they would bring in character emails just to get us attached to someone who dies and I already had enough people to worry about to really get attached. But the style of the book really is the strength. It tells you what you need to know without giving too much away.

D – Just goes to show that authors are meanies that want to mentally and emotionally traumatize you. So good job Kaufman and Kristoff! I’m scarred for life now!!

L – Also this book is gorgeous. Not only is the cover interesting but the actual pages are wonderfully laid out and really add more interest to the story.

L – I really enjoyed this book. And I can’t wait to be emotionally traumatized by the next two in the series.

D – Amen. Amen. Gonna have to wait a couple months though…I think I’m still recovering. So join us in our misery people!